The Hobbit of Flores 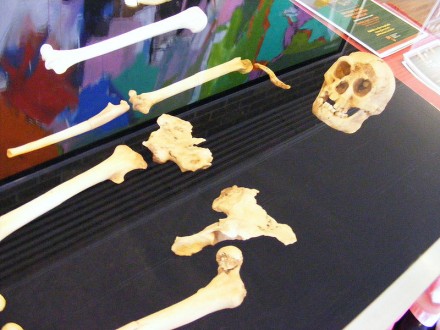 Homo floresiensis, nicknamed “hobbit”, is an extinct human species discovered in 2003 on the island of Flores in Indonesia. Partial skeletons of nine individuals have been recovered, including one complete skull. This hominin is remarkable for its small body and brain and for its survival until as recently as 12,000 years ago.

The first set of remains to have been found was nicknamed the Little Lady of Flores or “Flo”. Flo’s height has been estimated at about 1.06 m (3 ft 6 in).  This estimate is outside the range of normal modern human height and considerably shorter than the average adult height of even the smallest modern humans, such as the Pygmies (<150 cm – 4 ft 11) Twa, Semang (137 cm – 4 ft 6) of Africa, or the Andamanese (1.37 m – 4 ft 6). Flo’s body mass has been estimated at 25 kg.

To explain the small stature of Homo floresiensis, Brown et al. have suggested that in the limited food environment on Flores Homo erectus underwent strong insular dwarfism, a form of speciation which has also been observed in other species on Flores, including a dwarf Stegodon elephant species.

3 thoughts on “The Hobbit of Flores”