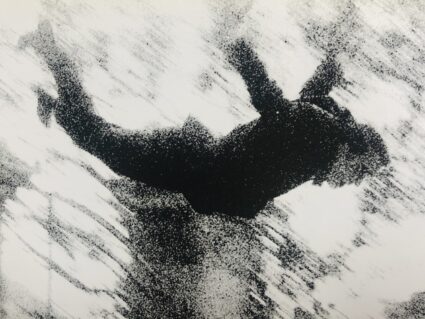 Tsimtsum is a Hebrew term meaning contraction, constriction or condensation. In the Kabbalah it is used to explain how God initiated the Creation by a process of contracting from his infinite omnipresence. Within the resulting space mankind could come into existence. So basically God actively shrunk for others to exist. The first creative act was the act of making space, without which it is impossible to be creative.

The details of tsimtsum and how it relates to the other themes in kabbalistic thought are complex and actively debated among scholars. Yet the central premise of space-making stands and has inspired The Incredible Shrinking Man since its early days. The notion that the creation of space is the first creative act in regards to change, and that it is impossible for anything new to come into existence without an act of retraction, is fundamental to shrink thinking. And if God is willing to make space for the other then who are we to deny it? The Incredible Shrinking Man proposes to man to shrink both literally and metaphorically in order to create the possibility of positive transformation. We should invite ourselves to embrace a desire for less and a curiosity for what will come into being in the space we’ll vacate. We should invite ourselves to the very real space within ourselves and within the world as we shrink away from bankrupt ideas such as always having to reach full potential, continuous growth and man’s dominance over other forms of life.