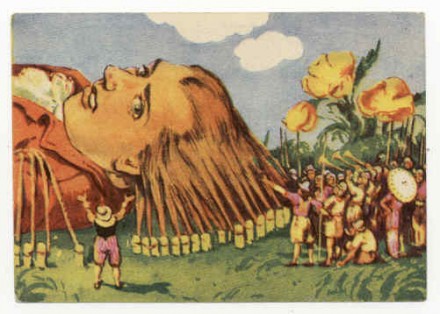 Literature, both high and low, has a lot of insights to offer when it comes to our view on size differences. Here’s a list of books, periodically updated and expanded, in which size  plays a key role.

Gulliver’s Travels by Jonathan Swift (published 1776-7). In this political satire Gulliver meets with the very small (in the land of Lilliput) as well as the very large (in Brobdingnag).

Slapstick by Kurt Vonnegut (published 1976). In this science fiction novel the Chinese make vast leaps forward by miniaturizing themselves and training groups of hundreds to think as one. Eventually, the miniaturization proceeds to the point that they become so small that they cause a plague among those who accidentally inhale them.

Micro by Michael Crichton (published after his death 2011). A techno-thriller set on Hawaii about a group of students who are shrunk and forces to survive in a hostile natural environment while being followed around by bad guys trying to kill them. More fun then it sounds with some nice observations of reality at very small size.

The Diminishing Draft by Waldemar Kaempffert (published 1918). A professors falls in love with a student who discovers a way to shrink living organisms so that they are tiny doll-like petrified objects that can come back to life and normal size.

Alice’s Adventures  in Wonderland by Lewis Carroll (published 1865). Alice goes through a number of size changes after jumping into the rabit hole.

Tarzan and the Ant Men by Edgar Rice Burroughs (published 1924). Tarzan, the king of the jungle, enters an isolated country called Minuni, inhabited by a people four times smaller than himself.

The Tin Drum (Die Blechtrommel) by Gunther Grass (published 1979). Growing up in Gdansk in Poland during the turbulent times of Nazi Germany Kasper decides to never grow up, and remain small for the rest of his life.

The Micronauts by Gordon Williams (published 1979). In this book, most of the world’s food supplies have been devastated by blight, and scientists are struggling to come up with a solution. One of the more radical factions develops a way to clone people at tiny size, where feeding them wouldn’t be a problem.

The Shrinking Man by Richard Matheson (published 1957). While on a boating holiday, Scott Carey is exposed to a cloud of radioactive spray. A few weeks later he can no longer deny the extraordinary truth. Not only is he losing weight, he is also shorter than he was.

The Food of the Gods and how it came to Earth by H.G.Wells (published 1904). Not about small people, but about very large everything else. Still allows for some interesting reflection on the abundance we could shrink towards, as well as it dangers.