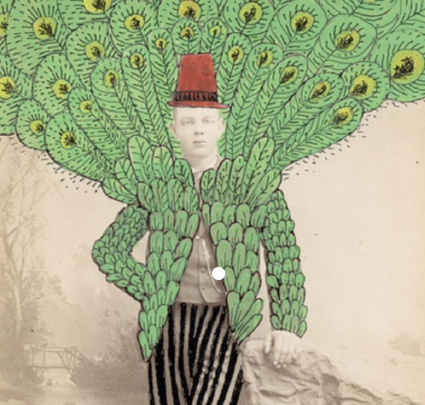 Fisherian runaway is a mechanism proposed by the mathematical and evolutionary biologist Ronald Fisher, to account for the evolution of exaggerated male ornamentation by persistent, directional female choice. When females are attracted to a certain trait within males, this trait over time gets over-emphasised because males with the trait will be selected by the female. An example is the colourful and elaborate peacock plumage. The bird’s extremely long tail seems incompatible with natural selection because it requires a great deal of energy to grow and maintain, reduces the bird’s agility, and may increase it’s visibility to predators. Yet, the tail has evolved, which indicates that females have a preference to mate with peacocks that possess a longer and more colourful tail. Peahens that select long-tailed males  in turn have male offspring that are more likely to have long tails and thus are more likely to be sexually successful themselves. Equally importantly, the female offspring of these peahens are more likely to have a preference for peacocks with longer tails. However, because the costs for the production of such a tail are so high the absolute fitness levels of all the members of the population (both male and female) is less than it would be if none of the peahens had a preference for a longer or more colorful tail. In his book The Selfish Gene, Richard Dawkins writes: ” In a society where males compete with each other to be chosen as he-men by females, one of the best things a mother can do for her genes is to make a son who will turn out in his turn to be an attractive he-man. If she can ensure that her son is one of the fortunate few males who wins most of the copulations in the society when he grows up, she will have an enormous number of grandchildren. The result of this is that one of the most desirable qualities a male can have in the eyes of a female is, quite simply, sexual attractiveness itself.”

90 to 95% of women feel more attracted to tall men. Much like the peacock’s tail this means more people are born that are tall and/or have a preference for taller partners. In this Fisherian runaway the human species continues to grow taller while it is abundantly clear that height itself has few, if any, real advantages, is mostly a unnecessary ornament and from a survival perspective ultimately leads to maladaptation.