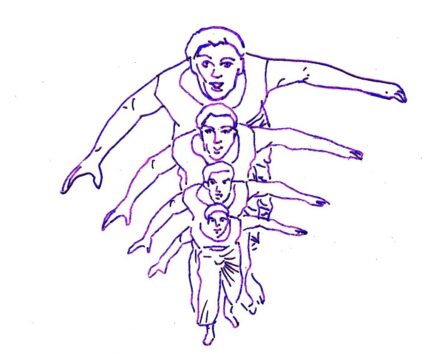 The Incredible Shrinking Man takes its name from a 1957 movie, based on a book by Richard Matheson. In it the protagonist Scott Carey slowly starts shrinking after having been exposed to radioactive pesticides. The film (and book) is about coping with this situation. Towards the very end of the movie, when Scott is getting so small it is almost impossible to see him, he defeats an enormous spider so he can get to a piece of cheese. Then Scott speaks his final words:

“This was the prize I had won. (he’s talking about the cheese) I approached it in an ecstasy of elation. I had conquered. I lived. But even as I touched the dry, flaking crumbs of nourishment it was as if my body had ceased to exist. There was no hunger. No longer the terrible fear of shrinking. Again I had the sensation of instinct. Of each movement, each thought tuned to some great directing force.”

“I was continuing to shrink, to become… What? The infinitesimal? What was I? Still a human being? Or was I the man of the future? If there were other bursts of radiation, other clouds drifting across seas and continents, would other beings follow me into this vast new world? So close, the infinitesimal and the infinite. But suddenly I knew they were really the two ends of the same concept. The unbelievably small and the unbelievably vast eventually meet, like the closing of a gigantic circle. I looked up, as if somehow I would grasp the heavens, the universe, worlds beyond number. God’s silver tapestry spread across the night. And in that moment I knew the answer to the riddle of the infinite. I had thought in terms of Man’s own limited dimension. I had presumed upon Nature. That existence begins and ends is Man’s conception, not Nature’s. And I felt my body dwindling, melting, becoming nothing. My fears melted away and in their place came acceptance. All this vast majesty of creation, it had to mean something. And then I meant something too. Yes, smaller than the smallest, I meant something too. To God, there is no zero.”