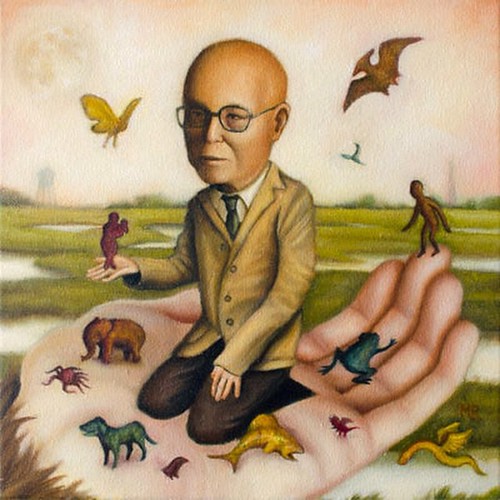 We can only speculate on what inspired the Japanese palaeontologist Chonosuke Okamura to develop his exceptional Fossil Laboratory. Perhaps he felt that the rather unglamorous study of tiny fossil of algae and vertebrates from the Ordovician period limited his imagination. Or maybe this is a case of extreme face pareidolia. And than of course it is possible that Okamura felt he was really onto something. For whatever reason, his attention was clearly directed towards the small. Starting in the 1970’s Okamura reported finding fossil remains of over a thousands different species of mini-creatures. Petrified in the 425 million year old rocks of a Japanese mountain he found tiny fishes, microscopic birds, mini-mammals and plants each no more than a few millimetres tall. He also found extremely small people engaged in all sorts of activities. According to Okamura the tiny ‘homunculus’ had a stature of only 1/350 that of contemporary man, but already had the same basic shape.  Even more puzzling is his detailed description of these microscopic people kissing, dancing and feeding their children.  Although thoroughly embedded within the realm of paleontological fantasy, Okagawa’s suggestion of a smaller reality offers mankind a lens through which to observe the present, and realise that all life started with a microscopic living entity. An entity that may still be embedded within the DNA in all of us. If it is the fossil hunter’s original desire to reconstruct the past then maybe it was Okamura’s wish to project onto them a vision of the future.

Japan is the conceptual epicentre of shrink philosophy. Our ongoing series of Japanese Miniatures collects and connects these stories and hopefully eventually will be able to inspire some of the fundamental Japanese sensitivity and desire towards smallness in the rest of the world.