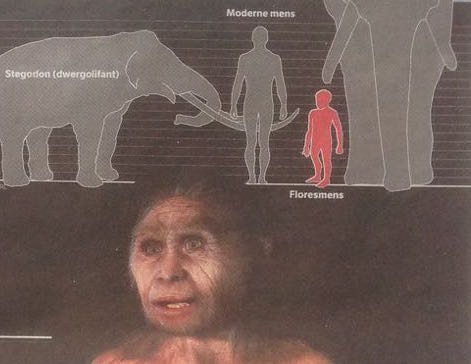 Ever since 2004 when several remains of a 50.000 year old tiny bodied human species were excavated, the Indonesian island of Flores and its ancient population have been in the centre of paleontologists attention. Homo floresiensis as it was named inspired a lively and sometimes heated debate about smallness and the human species. Who was this very very small human? How long had it been around? How did it get to be so small? And where did it come from?

Now, at a 700.000 year old site called Mata Menge, researchers have found strong evidence that the ancestors of Homo floresiensis were indeed a group of Homo erectus that came to Flores one million years ago, possibly following a tsunami or other major disaster. Interestingly they then became subject to a much more rapid process of insular dwarfism then had previously been suggested. In the course of just 300.000 years since first appearing on Flores the hominin lost 1/3rd of its height. This is up to 500.000 years faster then previously suggested. So, for at least 700.000 years the tiny species roamed the island of Flores, long before Homo sapiens even existed. Adam Brumm at Griffith University in Queensland, who co-led the excavations together with Gert van den Bergh of the University of Wollongong, said: “The island is small and it has limited food resources and few predators, other than komodo dragons, so large-bodied mammals that wound up on this rock would have been under immediate selective pressure to reduce their body mass. Being big is no longer an advantage when you’re trying to survive in such an isolated and challenging environment.”