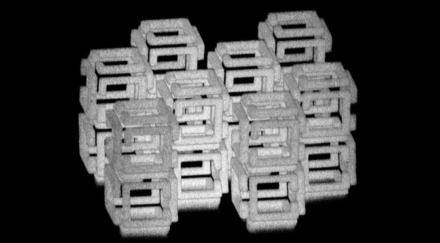 It’s not quite the Dehnel phenomenon but implosion fabrication does allow for a different perspective on shape shifting, size and shrinking and may just add a piece to the puzzle of achieving a smaller size for that bloated hydro-species by the name of Homo sapiens.

Researchers at MIT created a technique to shrink 3D printed structures to the nanoscale while attaching various functional particles like gold or DNA to a super absorbent polymer hydrogel  scaffold . By dehydrating the scaffold the printed structures reduced a 10-fold in size in all dimensions (a 1000 fold in mass). Senior researcher Edward Boyden and his students further developed a technique known as expansion microscopy,  which involves embedding tissue into a hydrogel and then expanding it, allowing for high resolution imaging with a regular microscope. By reversing this process, the researchers found that they could create large-scale objects embedded in expanded hydrogels and then shrink them to the nanoscale, an approach that they call “implosion fabrication.” Using two-photon microscopy, which allows for precise targeting of points deep within a structure, the researchers attach fluorescein molecules to specific locations within the gel. The fluorescein molecules act as anchors that can bind to other types of molecules that the researchers add. “It’s a bit like film photography — a latent image is formed by exposing a sensitive material in a gel to light. Then, you can develop that latent image into a real image by attaching another material, silver, afterwards.” Once the desired molecules are attached in the right locations, the researchers shrink the entire structure by adding an acid. Currently, they can create objects that are around 1 cubic millimeter, patterned with a resolution of 50 nanometers.