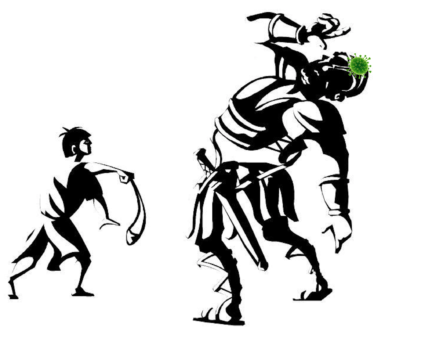 It’s interesting to listen to Malcolm Gladwell as he deconstructs the presumptions behind the story of David and Goliath. Rather than presenting it as one of our best known underdog stories he suggests that Goliath in fact never stood a chance. According to Gladwell this was never a fight between a very tall and mighty warrior and a small and therefor weak shepherd boy. Rather he presents it as the story of an immobile and almost blind giant suffering from acromegaly against an agile, well-equipped and healthy young man. Goliath was nothing but a very large sitting duck. Before he could engage David in hand to hand combat he was hit between his eyes by David’s slingshot.

Gladwell: “What they didn’t understand was that the very thing that was the source of Goliath’s apparent strength was also the source of his greatest weakness. And there is, I think, in that a very important lesson for all of us. Giants are not as strong and powerful as they seem and sometimes the shepherd boy has a sling in his pocket.”