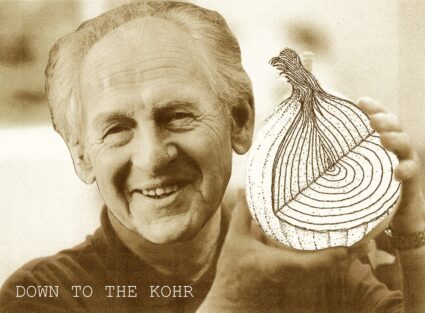 The Austrian economist and political scientist Leopold Kohr opposed the “cult of bigness” in social organization. He inspired the movement for a human scale and the Small Is Beautiful movement. His most influential work was The Breakdown of Nations. In 1983, he was awarded the Right Livelihood Award. In the series Kohrisms we want to give attention to some of his precise insights in the nature of big and small.

In The breakdown of Nations he writes: …smallness is not only a convenience. It is the design of God. The entire universe is built on it. We live in a microcosmos. Perfection has been granted only to the little. Only in the direction of the minuscule do we ever come to an end, to a finite, a boundary, where we can conceive the ultimate mystery of existence. In the direction of the colossal we arrive nowhere. We may add and multiply, and produce increasingly vaster figures and substances. But never an end, as there is nothing that cannot always again be doubled, though doubling in the physical sense soon means collapse, disintegration, catastrophe.