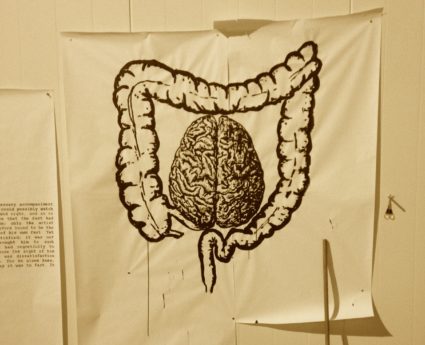 The human brain is generally regarded as the organ that makes us stand out from all other forms of life. People have unusually large brains in relation to the size of the body: About 3x larger than that of our closest living relative, the chimpanzee. And since the brain consumes a lot of energy, up to 25% of the basic metabolic rate, largeness comes at a considerable cost.

Despite cognitive benefits the energy required imposes serious constraints on brain size evolution. One possibility is to raise overall metabolic rate and simply add the required calories to the diet but greater energy-needs also create greater dependence and vulnerability and often are simply impossible. In the expensive tissue hypothesis Aiello and Wheeler argue that within a species the brain can become larger if the body reduces the size of other major metabolic organs. As it turns out for a primate of our body size the digestive tract is a lot smaller than is to be expected. Human sacrificed guts for brains. Such sacrifice was possible because people were able to find food sources that are much easier to digest, allowing the gut to operate much less energy intensive and compensate for the metabolic cost of the larger brain. Aiello and Wheeler went on to postulate that a larger brain would allow for more complex foraging behaviour, which would result in a higher quality diet, which would then allow the gut to shrink further, freeing up more energy for the brain, which ultimately led to the invention of cooking, agriculture, the Green Revolution and today’s advances in crop development. And when the gut couldn’t shrink any further those needs have moved well beyond the limitations of the body. This is your brain on fossil fuel.