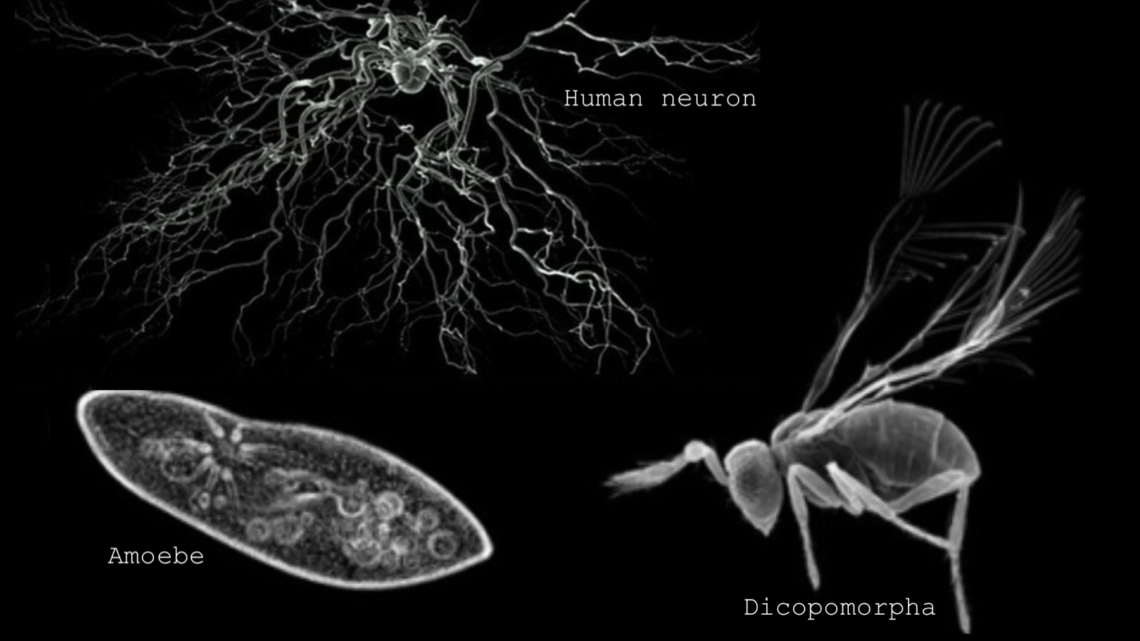 There are clear advantages to becoming very small. Micro-organisms gain access to new niches, acquire new food sources and avoid predation. They shrink towards abundance. Yet there are limiting factors to how small an animal can become including the disruption of thermoregulation or respiration, water loss, difficulties in mobility due to greater environmental viscosity, water surface tension, physical cell and tissue size, and the minimum requirements of egg and brain size. At some point an animal can become so small that it doesn’t only shrink towards abundance but towards a whole new set of physical challenges.

Micro-insects (the diverse range of insects less than a millimeter long) are an intriguing components of the micro-world. The not so random figure of 0,4mm seems to be at the lower limit of body length for free-living insects although some mite and wasp species are even smaller at 0,2mm. This puts them in the same order of size as amoebe and the human neuron! The main constraint for the process of body miniaturisation in adult insects seems to be the limit imposed by the necessity to produce eggs that are large enough to permit development of a viable larva. A by-product of this implication is that the smallest organisms only have a single ovary. It also suggests that males can become even smaller than females because they only need to produce fertile sperm, which does not normally require as much resources and space as an egg.

The most convincing illustration that egg size limits female insect body miniaturisation is the smallest known insect, Dicopomorpha echmepterygis, an egg-parasitoid. Females of this species are 386–550 μm in body length, winged, fully functional, and able to produce a single egg at a time of 106–110 μm in length. The structurally simplified males of the species are only slightly larger than those eggs. They’re also blind, wingless, 139–240 μm in length and only an eighth of the body volume of that of females, which is an insect record.

Brain size might be the second most important factor limiting insect miniaturisation. Neuron cell size reaches a lower limit of 2 μm in diameter in the smallest insects, which is at the lowest recorded limit in multicellular animals. The smallest brains still have to maintain all circuits of sensory input necessary for the organism to function. This is particularly true for the adult stage compared to larvae, because adults may need to handle more complex behaviour and associated necessary sensory input. Another restricting mechanism might be the necessity to maintain a certain proportion between neuron body size and axon diameter. The latter have to be greater than 0.1 μm in diameter to permit transmission of a signal.

The third limiting mechanism for insect miniaturisation is physical genome size, which limits volume of the nucleus by filling it up with chromatin. The nucleus can occupy as much as 80 to 90% of a neuron cell body, thus genome size, brain size and linear body size are possibly linked together as correlated parameters.