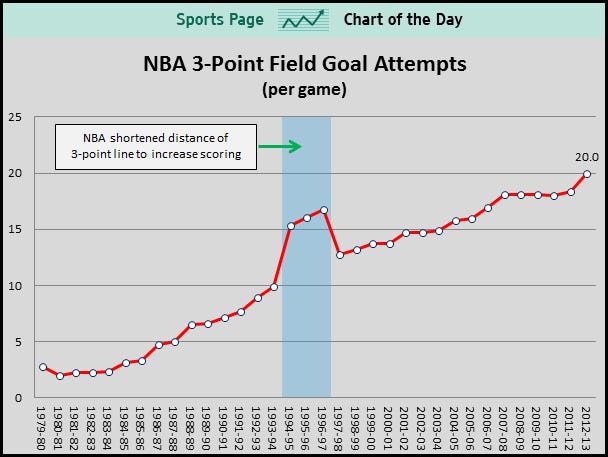 Not long ago basketball was dominated by very tall men who positioned themselves near the basket to score, rebound, or discourage any opponent from getting to the hoop. The closer a player got to that hoop, the better, as shots from up close earned him the same two points as shots from far away, but with a much greater chance of success. The result was a congested space under the hoop, rather predictable play, and games that were quite often boring to watch. In the 1979/1980 season the NBA introduced the three-point field goal, and things changed.

Not quickly, as for the next 30 years three-pointers remained somewhat of a novelty. But then came Stephen Curry of the Golden State Warriors. Curry turned out to be very good at shooting three-pointers, and coincidentally so was his team mate Klay Thompson. Their scores made a difference and both became central players on a team that started to win championships. Their success shows that when the impossible becomes possible, it quickly becomes the norm and, sometimes, changes the way the game is played, forever.

Now many more players have a go at three-pointers. Not only because of the extra point that it might bring, but because of what the threat of it does to a defense, and to an offense. The three-point shot has now become a basic strategy. A team goes up the floor looking for three-pointers. Yet even when a three doesn’t happen, in their preparation for it, offensive players spread out more, defensive players have to follow them, and the players come to inhabit a bigger space. All 10 now have more room, more time. Players no longer need to get to the hoop. The action no longer needs to funnel toward the forest of big men that guard it. In this NBA game, it doesn’t matter whether you are 6 feet tall or 8 feet tall; a ball shot from behind the three-point line will loop over the outstretched arm of even the tallest player. This is no longer about a small guy having to play big. A big guy now has to play small.