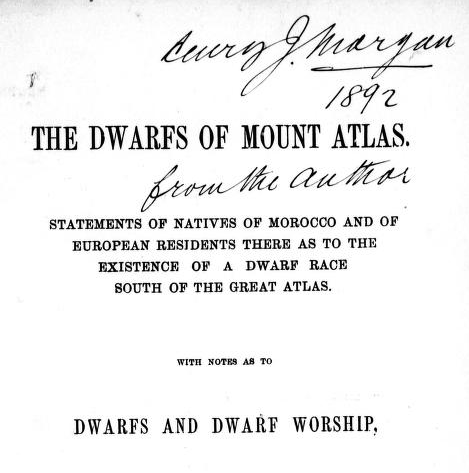 At the end of the 19th century R.G. Haliburton ‘hunted’ for a secret dwarf tribe he believed to live somewhere in the Atlas Mountains in Morocco. It aroused quite some interest as this article in The New York Times dated 27 september 1891 shows. The full transcript of the investigations by Haliburton gives an insight into 19th century antropology. One of Haliburton’s informants described the secret tribe as being about four feet high with a red complexion, and short woolly hair. He said ‘ The small people are called ” Ba/aka ” or Oulad Mebrok, the Blessed Tribe, or Sons of the Blessed, and are supposed to bring good luck, so we do not like to talk about them.’ There is also talk of the dwarfs as being holy men.

It makes you wonder about the relationship between small body size and religion, mythology and magic.