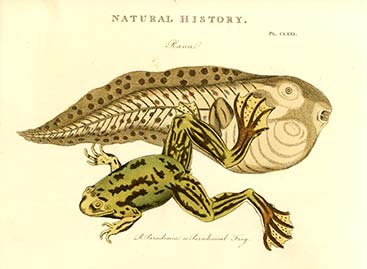 Pseudis Paradoxa is a common frog living in the region between Colombia and Surinam. Its development however is far from common and serves as a reminder that growth doesn’t necessarily have to do with becoming larger. Like most frogs Pseudis Paradoxa starts out as frogspawn before turning into tadpoles. The tadpoles of the paradox frog however stand out because they continue to grow rapidly until they’re about 25 cm long, making them the largest tadpoles in the frog world. A regular frog’s metamorphosis then commences by developing its legs and shrinking its tail into the body. What sets Pseudis Paradoxa apart is that it is not just the tail that shrinks, but the entire body. Upon reaching full adulthood the Paradoxical Frog, or Shrinking Frog as it is sometimes appropriately called, has only 1/4th of the size it used to have as a tadpole. This idea of growing into a smaller adulthood so contradicts with our general notion of development that it was named Paradoxical Frog. But it’s only a paradox because we seem to be able to think in just one direction, towards bigger and taller. It says more about the inflexibility of our thinking than it says about the paradoxical nature of growing towards smallness. Because that’s in fact a great idea. Pseudis Paradoxa raises the question if perhaps the human species as a whole is still in its embryonic state. Are we giant tadpoles, waiting for the moment that we’ll metamorphose into more suitable, more efficient, smaller beings? Are we big toddlers on the verge of shedding our baby fat?