Thumbs Up for Teens. 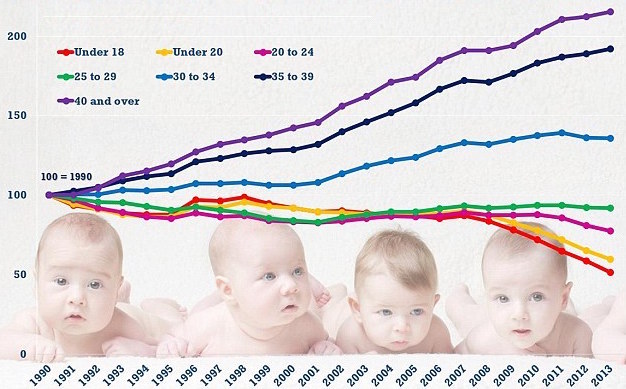 We don’t yet know why but it seems younger mothers have shorter baby’s. A recent study in New Zealand assessed whether increasing maternal age would be associated with changes in height, body composition, as well as lipid and metabolic profiles in childhood. The age of women having their first child has increased considerably over the past decades. Most children in developed countries nowadays are born to mothers aged over 30 years. Unfortunately this increasing maternal age is linked to greater risk of type 1 and type 2 diabetes, higher blood pressure in childhood, complications during pregnancy and physiological changes in the reproductive system such as alterations in hormone levels. And now on top of these increased risks, baby’s of older mothers also turn out to be taller. Although there are certain advantages such as a reduction in abdominal fat and improved insulin sensitivity, children born of mothers over 30 were also an average 1,5 cm taller than those of mothers under 30. The researchers are not sure how to explain the findings. Perhaps, they suggested, the hormonal mix produced during pregnancy by an older woman differs from that made by her younger counterpart. Not surprisingly the researchers then define the taller children as having a favourable phenotype. Why? Because they’re taller? Once again it shows how the auxological confusion about height and health is rooted deeply within the scientific community. Being tall is not necessarily healthy, and the fact that we’re tall as a result of good conditions, doesn’t make the condition of being tall itself good.

But on the other hand, who would have thought teen mums are in fact shrink activists.