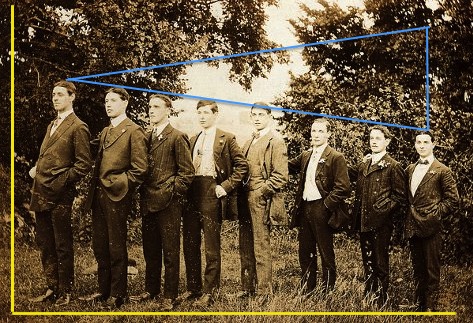 Most women prefer tall men over their shorter rivals. Over a century of feminism hasn’t changed much about that. Unfortunately this preference is one of the forces that leads to a global increase in human height. Because of women’s preferences tall men have more children and spread more of their tall genes around, putting extra pressure on the Earth’s resources. If we are serious about downsizing average human height then we should show the flawed reasoning that’s behind this height discrimination.

1. Tall men are stronger and are therefore better protectors and providers. Perhaps in prehistoric times and a little beyond this was true but the world has changed. Most men spend their days sitting behind desks And although tall man may have a little extra absolute strength to boost about, their relative strength is considerably less. As a consequence they experience more physical detriment, more back problems, bad knees, and are more often not allowed to lift heavy thing.

2. The height of tall men is a sign of health. Not true. The fact that you grow up in an environment that stimulates greater height does NOT mean that being tall itself is healthy. In fact it is not. Tall people die much younger then shorter people; about 6 months younger for every centimetre above 153cm.

3. Tall men make more money. Unfortunately this is true. Height discrimination is widespread. Taller men make an extra 200 to 300 dollar extra for each centimetre of height. And although this is ridiculous and should be addressed it is also true that tall men need much more to sustain themselves. The question is if the extra cash really flows to their families or into their stomach. Also over the last century greater female financial independence has made male income less relevant in choosing a partner.

If deep down women feel attracted to tall men because of rational decisions and evolutionary advantages then there are signs of the emergence of a different set of rationals. Perhaps someday soon the tall men will lose their reproductive dominance. There’s already evidence that during economic crisis women are more likely to feel attracted to shorter men because they are more reliable. Since this crisis is not likely to go away any time soon that would turn the tale of tall men into just another tall tale.