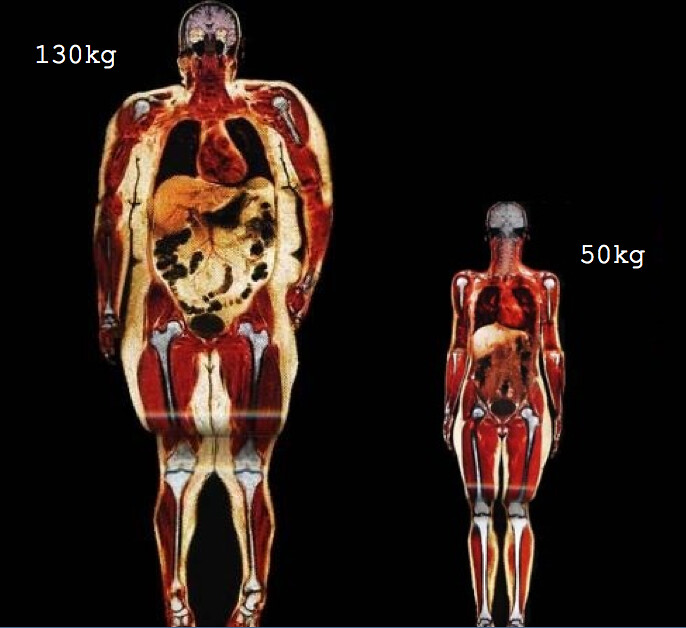 A new REPORT published on BioMed Central rightfully warns us of the need to consider the ecological effects of increasing human weight. Obese and overweight people globally consume an extra amount of food that could feed 300 million people. From data collected in 2005 researchers calculated the total human biomass of the planet’s adult population at  287 billion kilograms. Measures included population size; a person’s fat content, also known as body mass index (BMI); and height.  About 15 billion kg of this total human biomass was due to overweight people, one third of whom live in the United States. If we’d all eat the American diet, global food intake would increase fivefold. The report states: ‘Although the concept of biomass is rarely applied to the human species, the ecological implications of increasing body mass are significant and ought to be taken into account when evaluating future trends and planning for future resource challenges. Our scenarios suggest that global trends of increasing body mass will have important resource implications and that unchecked, increasing BMI  could have the same implications for world energy requirements as an extra 473 million people. Tackling population fatness may be critical to world food security and ecological sustainability.’

Although The Incredible Shrinking Man is not primarily concerned with obesity there is an interesting parallel in the fact that greater height causes greater weight. Thomas Samaras points out (as did Archimedes before him) that a greater height of 20% results in a 73% weight gain. All that extra mass needs extra food, fuel and space, of which we have less and less. Future reports must also address the issue of height. If everybody grows as tall as the Dutch and as obese as Americans the consequences will be tragic.