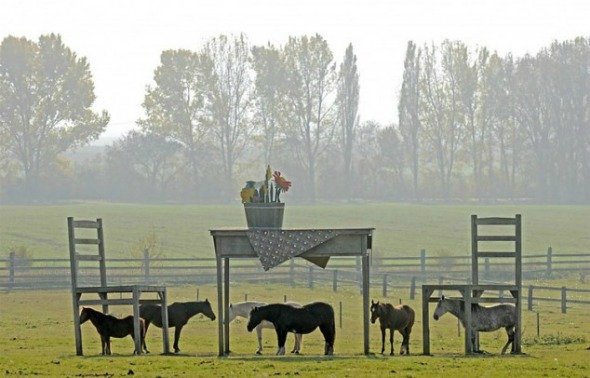 Palaeontologists studying fossilised horses have found a direct link between the size of mammals and climate change. According to Dr. Jonathan Bloch, curator of the Florida Museum of Natural History, as temperatures go up size goes down, and vice versa. Bloch: ‘Horses started out small 56 million years ago, about the size of a small dog. What’s surprising is that after they first appeared, they then became even smaller and then dramatically increased in size, and that exactly corresponds to the global warming event, followed by cooling.’ Because warming happened much slower during the Paleocene-Eocene Thermal Maximum, mammals had more time to adjust their body size. It’s not clear that we’re going to see the same thing happening in the near future, but we might and there’s evidence that perhaps it’s been happening all along.

Philip Gingerich of the University of Michigan foresees an interesting effect for human beings: ‘we’re going to be walking around 3 feet tall if we keep going the way we’re going. Maybe that’s not all bad and if that’s the worst it gets, it will be fine. You can either adapt, or you go extinct, or you can move, and there’s not a lot of place to move anymore, so I think it’s a matter of adaptation and becoming smaller.’

One thought on “Hot Adaptations”