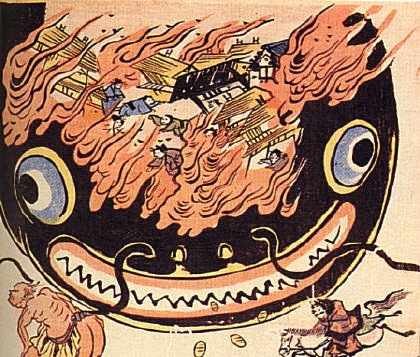 In 19th century Japan earthquakes were often represented by and even attributed to an enormously oversized catfish, the namazu. According to popular folklore under normal circumstances this large fish was kept under control by a deity. If the god however, was not managing his worldly affairs, the fish lashed out and caused earthquakes. In the aftermath of the particularly devastating Ansei quake in 1855 the theme of the namazu gained enormous popularity. Over 400 new woodcuts of earthquake related scenes with the namazu flooded the media. Remarkably, quite a few of these married the notion of natural disaster with failing leadership, depicting government officials as catfish.

Today good leadership is needed more then ever but shared responsibility is equally important. Our insatiable need for food, products, water and energy of has led to a situation infinitely more challenging then the natural tremors of namazu’s tail. Man has become a bigger threat to himself than any big fish ever was. In 2011 the Tōhoku earthquake caused one of the greatest and ongoing tragedies in human history. The resulting tsunami that hit the Japanese east coast was devastating. Yet the greatest threat resulting from the earthquake is manmade; the possible meltdown of the Fukushima nuclear reactor and the longterm effects of leakage of radioactive water into the Pacific Ocean. Paradoxically the image of a big fish also inspires a possible solution to man’s deeply destructive relationship with the planet. We should shrink, despite our fear to do so. Drastically smaller people would cut our energy needs by so much that we could easily sustain ourselves with the presently available renewable energy sources. And just one catfish could feed a small town.