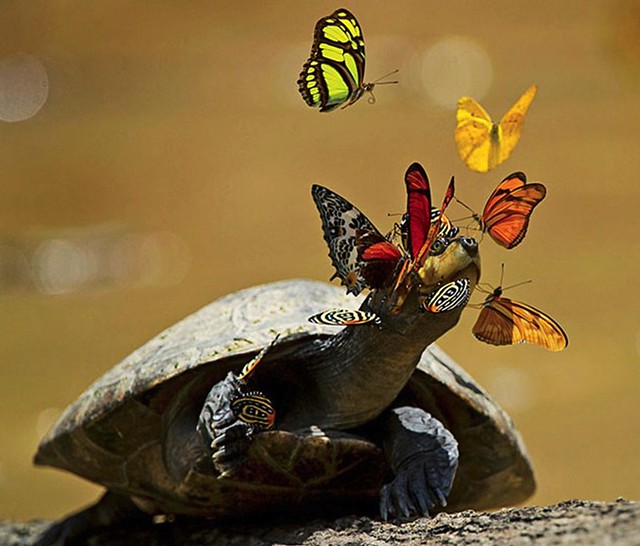 Size strongly influences our ability to recognise and benefit from specific small scale possibilities that would be available if man was a lot smaller. The act of shrinking promotes the Feynmanian awareness that our large size keeps us from a much richer experience of reality, as well as almost limitless abundance. Like these Amazon butterflies and bees that feed on the tears of river turtles for their daily ration of salt and protein, a scarce resource in the rain forest. Another investigation observed bees drinking human tears. It describes in great detail how the bee approaches and lands near the human eye: ” When seeking tears the bee first circled around one’s head, then zig-zagged in front of the eyes. After a few seconds it flew toward the eye, landed on the lower eyelashes and, grasping the eyelashes, crawled toward the eye where it plunged the extended proboscis into the gutter-like trough between lid and eye ball to suck lachrymal fluid. In many cases the landing on eyelashes was so close to the eye that the proboscis could reach the trough without crawling. During sucking, all legs either continued to clutch the eyelash, or the fore legs were placed on the lid or conjunctiva, while the middle and hind legs continued to grip the eyelashes. In rare cases a foreleg was placed onto the eye ball, and in one case the bee even climbed onto it with all legs.”

Perhaps more than anything else these careful observations show that shrinking is an act of coming closer to realities and possibilities that because of our large size seem invisible or unavailable to us. There’s much left to explore.