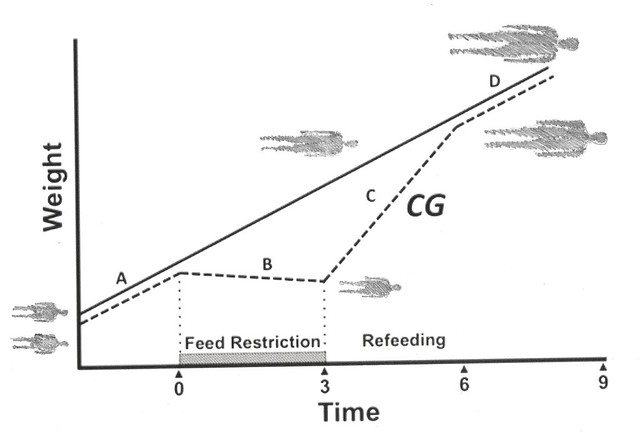 Catch-up growth is the accelerated growth of an organism following a period of slowed development. Such slowing down is most often the result of environmental influences such as food scarcity, sudden changes in temperature, or other environmental stress factors. After the situation is normalised, growth not only returns but speeds up to compensate for lost time. The Incredible Shrinking Man is investigating specific environmental factors as strategies to reduce human height. Among these are calorie restriction and the modification of diet to include growth relaxers. If calming down growth during a certain period only results in the acceleration of growth afterwards it is important to know how to neutralise such effect.

Two hypotheses have been proposed to explain the mechanism : the neuroendocrine hypothesis, for which no persuasive experimental data have been produced, and the growth plate hypothesis, which cannot explain the increased growth rate observed in human catch-up growth. So it’s all still a bit of a mystery. And there’s good reason even beyond the desire to become smaller to investigate further. As any farmer will tell you in domestic animals compensatory growth is known to reduce lifespan. Now a new research paper titled ‘How boys grow determines how long they live‘, shows that the same health risks apply to people. Perhaps because of the body’s irrational focus on gaining height, other more important things get less attention, like making sure your organs, immune system and brain are well developed. In fact it makes you wonder if ‘normal’ growth hasn’t already been replaced by a permanent state of catch-up growth, speeding towards ever greater height and in the process compensating for … For what?