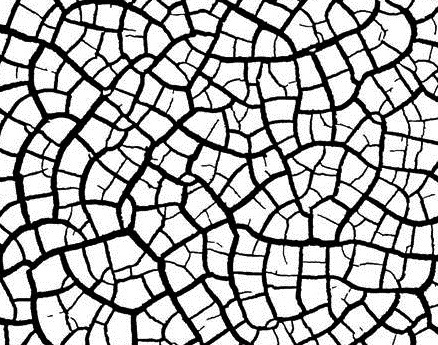 Small people have more skin than tall people, in relation to body volume. With every 10% decrease in body height, body volume decreases with 27%, while skin surface decreases with only 19%. This means, among other things, that smaller humans dehydrate more rapidly. There’s more evaporation and less volume. In regards to shrinking the human species to an average size of 50 centimetres it may be of some interest to investigate how specific organisms deal with situations of desiccation by physiological or behavioural adaptations.

In man, a 7% fall in body weight caused by water loss is described as severe dehydration, while water depletion leading to a 15-20 % loss of body weight causes coma and death respectively. Certain animals however deal with such and much more extreme levels of dehydration easily by tolerating a larger proportion of overall water loss from the body. Their desiccation tolerance is aided by a specific sugar by the name of trehalose that enables them to retain the cellular structures necessary for life while they wait for a drop of rain. The sugar is thought to form a gel phase as cells dehydrate, which prevents disruption of internal cell-organelles, by effectively splinting them in position. Rehydration then allows normal cellular activity to be resumed without the major, lethal damage that would normally follow a dehydration/rehydration cycle. Among the animals performing this resurrection are waterbears, sea monkeys and the larvae of a small fly, Polypedilum vanderplanki, which can lose up to 97% of its watercontent and wake up after re-hydration without so much as a skirm. Although it is not our aim to introduce another speculative element to the already steep challenge of shrinking the human species it’s important to think of ways to limit the physical risks of becoming smaller, or at least embrace the new possibilities of such a future. If fruit-flies can be our genetic body-doubles than certainly vanderplanki can.