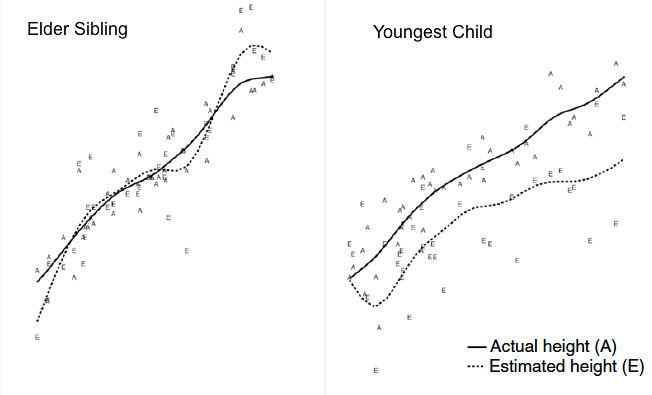 Dr. Jordy Kaufman, senior researcher at the The Swinburne BabyLab, asked himself why many parents, after the birth of a second child report that their first child appears to grow suddenly and substantially larger? Is it simply because of the contrast that stems from the comparison of the older child to the new sibling or is there a more complex bio-psychological reason for this phenomenon? Kaufman hypothesized that parents are subject to a kind of ‘baby illusion’ under which they routinely misperceive their youngest child as smaller than he/she really is. Then, when a new baby is born, this illusion ceases and the parent sees, for the first time, the erstwhile youngest at its true size. No wonder they’re shocked. They routinely misperceive their youngest child as smaller than he or she truly is. To proof this, the researchers asked mothers to estimate the height of one of their children by marking a featureless wall. The outcome was that youngest-children’s heights were significantly underestimated by no less than an average of 7.5 cm while estimates on older children were right on the money. (+ 0.4cm).

It’s possible that the “baby illusion” actually leads to better caregiving, Kaufman said, because a perception of baby-like features, such as cuteness or smaller size, helps parents prioritize care for the child who most needs it. Although the illusion of smallness is not what we’re after at The Incredible Shrinking Man, we do have an interest in the relationship between the perception of size and emotional attachment, for instance in the relationship between men and women.

Read the full REPORT for more information on the psychological reasons for the baby illusion.