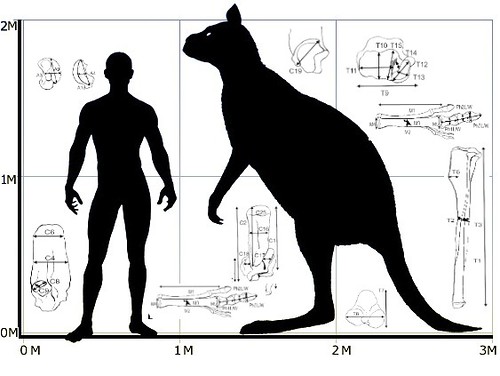 When asked what defines a kangaroo, most people would probably say it’s the fact that they hop. Christine Janis of Brown University was studying a species of giant kangaroo, the Procoptodon goliah when it occurred to her that its weight of 240 kg, it’s bone structure and the fact that its spine showed signs of arthritis, probably meant that this kangaroo was unable to hop. Unlike its smaller cousins it probably walked in a bipedal motion on two hind legs, much like humans do.

When a species becomes larger, fundamental aspects such as metabolism, relative and absolute strength and locomotion change. When we take a look at the tallest people that ever lived one of the first things we notice apart from their towering height is that their movements, much like the giant kangaroo, are different from the movements of shorter members of the species. To a regular sized person these movements might look clumsy, slow and uncoordinated. People with acromegaly often need the assistance of canes, leg braces or other forms of support because their relative strength in relation to body weight has decreased so much that they can’t walk by themselves. Without support they’d have to crawl, perhaps sparking evolutionary processes that would transform us into an entirely new species. Throughout evolution size has often initiated such change. Is a kangaroo that doesn’t hop, still a kangaroo?

One thought on “Non hopping Kangaroo”