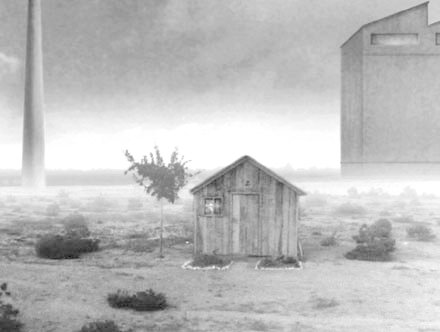 Joost Janmaat of Partizan Publik recalls his memory  of an intriguing search for a lost tiny town:

“I fruitlessly embarked on a quest for little people two years ago when I was in Detroit. I am gonna relate you the story anyway, since by posting it on your blog, the truth may yet unveil itself. During the war, the massive Detroit based automotive industry got geared towards the war effort. Car factories became weapons factories. Henri Ford‘s Willow Run plant in Ypsilanti Michigan was designated for the production of bomber planes. At the height of production, they produced a bomber a day. With these bombers, the skin was riveted onto the frame, which apparently took two people to do: one would slam the rivet from the outside, while the other would smash it from the inside. Now, to rivet the skin of the wings, they needed people that could squeeze themselves into the narrow frames. Little people from all over America were hauled to Michigan to work in this plant. The effort depleted the countries circuses, burlesque theaters and other fringe entertainment industries. Supposedly, Ford had had a special village build to house the little people. On a trip to Ypsilanti, we did speak to inhabitants who recalled the little people in town and ended up in a trailer park that was said to be the location of the village. And we did see a front door with a suspiciously low mounted door knob. But no definite proof of what one day must have been the largest midget settlement in the world.”