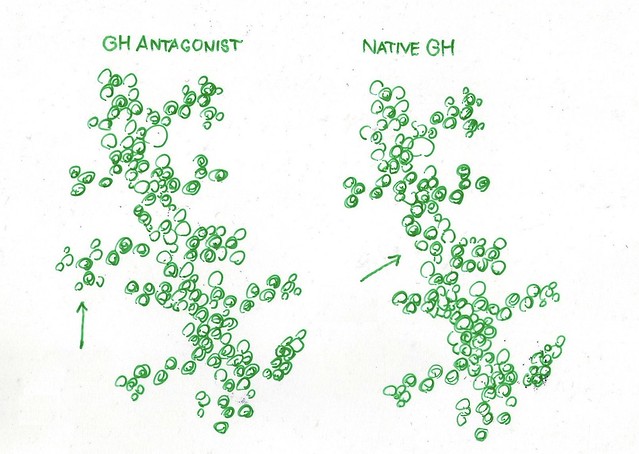 Pegvisomant (tradename Somavert) is a genetically engineered analogue of the human growth hormone (GH) that stops unnaturally vigorous growth in patients with acromegaly. It works as a GH receptor antagonist and blocks or dampens agonist-mediated responses by binding to growth hormone receptors on cell surfaces. Pegvisomant is used if the tumor of the pituitary gland causing the acromegaly cannot be controlled with surgery or radiation, and the use of somatostatin analogues is unsuccessful.  A total of nine mutations have been introduced to alter the binding characteristics of the molecule with human growth hormone receptor (HGHR). GH normally binds to two specific sites on its receptor. Pegvisomant binds to HGHR site 1 and blocks site 2, and is able to displace native GH. As a result, signal transduction is blocked and circulating concentration of insulin-like growth factor 1 (IGF-I), the principal mediator of GH action, is decreased.

Both pegvisomant and somatostatin could potentially function as endocrinological tools to reduce human size. A 2005 study shows that pegvisomant is able to arrest growth at an early age in children with acromegaly. And since humanity has a global case of gigantism perhaps this opens up the possibility of gradual endocrinological reduction in body size of future generations.

One thought on “Pegvisomant”