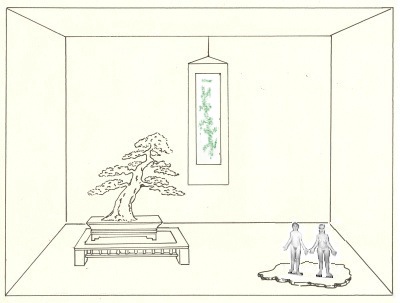 The cultural environment we made (and that made us) bombards us with signs that bigger is better. The very notion of shrinking creates such internal conflict that we are inclined to ignore its obvious benefits and condemn the whole idea to the realm of mad science. We lack a framework that supports pro-shrink reflection. But perhaps the Japanese tradition of the tokonoma can provide a space to initiate and support such reflection.

The tokonoma is the spiritual centre within a traditional Japanese house, consisting of an alcove holding 2 or 3 visual elements. The different connections between the elements create a dynamic riddle that initiates ideas and thoughts on man’s relationship with nature, perhaps similar to the tradition of the vanitas in western paintings. The most popular traditional elements are flower arrangements, haiku poems, bonsai trees and viewing stones but nowadays there is considerable freedom as to what can be placed inside it. The Incredible shrinking Man is experimenting with the tokonoma as a model to initiate deep reflection on the advantages of shrinking the human body. By juxtaposing visual elements that emerged over the last years of research on the topic of shrinking the human species we hope to inspire both ourselves and the public into considering smallness and formulating ways on how to achieve it. A first attempt at such a shrink tokonoma is set up as part of the exhibition Design Column #5 at Museum Boymans van Beuningen in Rotterdam.