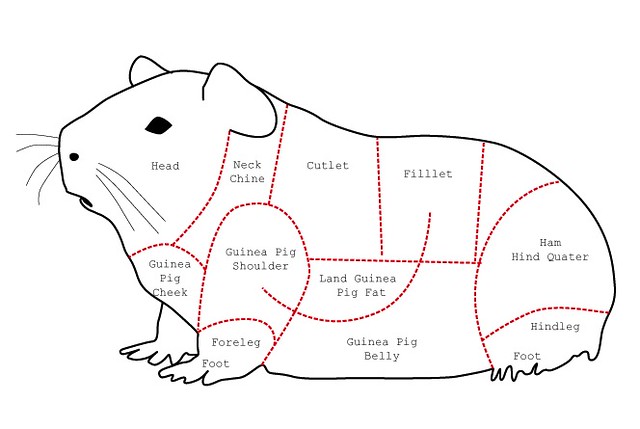 The 1991 OFA report ‘Microlivestock: Little-known Small Animals with a Promising Economic Future’ introduces several alternative small animals for domestication and meat and dairy production. Small animals are easier to breed and keep, and are a quick way of supplementing a diet, especially in less developed countries. One of the species of great interest to The Incredible Shrinking Man is the guinea pig, or Cavia porcellus.

In Latin America and a growing number of African and Asian countries guinea pigs are considered a delicacy and their meat fetches high prices. Cavies are clean and vegetarian. They have modest food requirements, although a year-round source of herbaceous feed is required. They breed easily. Over a period of 2 years one pair of guinea pigs can produce 260 new pairs. Ever since the introduction of Cavia porcellus to Europe in the 16th century they’ve become popular companions for kids and a model organism for researchers such as nobel prize winning microbiologist Robert Koch. What makes them good pets and test animals (their responsiveness to handling and feeding and the relative ease of caring for them) also makes them an excellent future alternative for larger domestic meat animals. As man becomes smaller, traditional farm animals like cows, pigs and sheep will be more difficult to handle and may need to be replaced. The guinea pig seldom exceeds 3 pounds in weight  (a little under the projected weight of The Incredible Shrinking Man) and many mature cavies are less than one pound. At birth the young weigh from 40 to 140 g, are fully developed, can see, smell, walk, run, eat, and even survive without the mother if necessary. The mature female comes into heat a few hours after giving birth. After mating, gestation takes about 68 days. The litter size varies from 1 to 7. Young cavies increase rapidly in body weight and, after setting aside the largest for breeding, they can be eaten at 3-4 months after birth. It is not advantageous to maintain them longer as they will grow slower and less efficiently after 4 months of age.

To learn more about the production of cavy meat The Incredible Shrinking Man recently opened its first  guinea pig farm in Amsterdam (May 2013). For more information contact us.

More on the production of Cavia porcellus in this elaborate Guinea Pig Management Manual.

One thought on “Micro-Livestock: Guinea Pig”