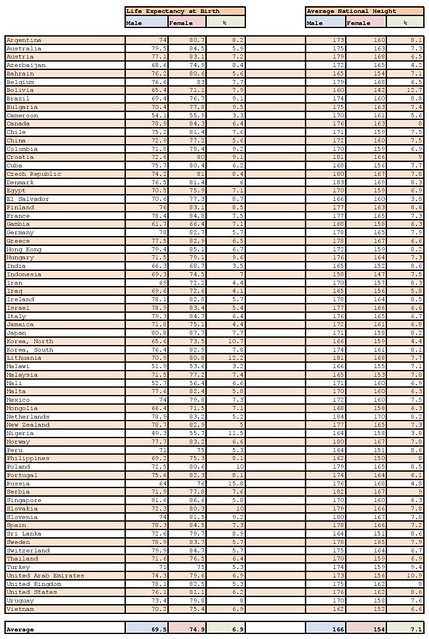 Over the years science has put forth innumerable explanations as to why women outlive men. Of all people over 100 years or older 85% are women. Some think it is because men work harder than women. Others suggest it’s because women are more sociable and better at dealing with stress. Another reason given is that men are more successful at suicide attempts. Or perhaps, some say, it’s because women have 2 X-chromosomes, iron deficiency or a stronger immune system. Some even suggest their advantage is the result of the pharmaceutical industry’s focus on women as target group. There are claims that women live longer as a result of their role as caregivers or the fact that men die younger because of their risky lifestyles, dying more often from accidents and homocide. And no doubt there’s truth in the notion that there’s a significant difference because men smoke and drink more. However, the most obvious reason tends to be overlooked: Women are shorter. After carefully examining the average height and average life expectancy of 72 countries around the world The Incredible Shrinking Man would like to put forth the hypothesis that the most important reason for the difference between the average life expectancy of men and women is the result of the difference in height. Women are generally 7% shorter then men. They also outlive men by 7%.