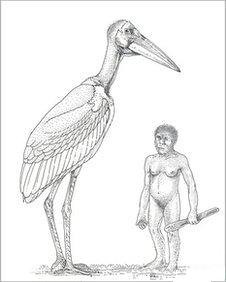 The research for The Incredible Shrinking Man broadens, and some surprising connections are surfacing. In earlier reports on dwarfism and gigantism we discovered the special position of islands in regards to the size of its inhabitants. The Indonesian island of Flores is again the stage for an unexpected meeting of 2 examples of this phenomenon. We reported before on the dwarfed Homo Floresiensis, who was only about 100 centimeters tall. They now seem to have lived in the same time as a recently discovered giant stork, making for an interesting new take on the notions of megalophobia and ornithophobia.

It is becoming more and more clear that size is very flexible. We were elated at the discovery of an iguana who physically shrinks up to 20% when food is rare, and now it has been discovered that fish do the same.

“Growth of the body length in vertebrates is well known to be unidirectional, with organisms progressively increasing in body size as they become older. However, there is evidence that body length shrinkage is a survival strategy for some vertebrates under unfavourable environmental conditions. Here we report both experimental and ﬁeld evidence that the body length of young stream-dwelling salmonids can decrease in winter.”