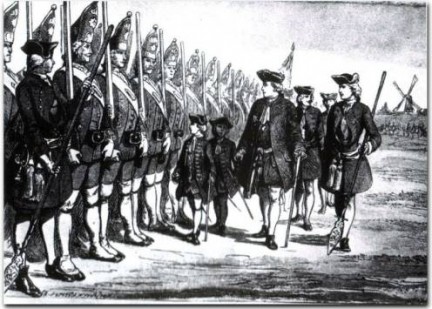 Tall Tales is a new series of stories that investigate our obsession with height. Throughout history there have been iconic moments, stories and situations that shaped the fundamental yet unfounded belief that taller is better. First up; the Potsdam Giants.

The Potsdam Giants was a Prussian infantry regiment composed of very tall soldiers. Throughout the reign of the Prussian king Friedrich Wilhelm I of Prussia (1688–1740) the unit was known as the giant guard of Potsdam in German, but the Prussian population quickly nicknamed them the Langen Kerls (“long guys”). The minimum required height to be recruited was 1.88m, well above average for the time, and many stood as high as 2 meters or more. Friedrich payed handsome sums of money to fathers with tall sons, and tallness became a treasured quality and a way to get attention and privileges. Despite the high wages not everyone was happy. His increased obsession with the regiment led Friedrich to resort to forced recruitment, kidnapping, as well as forced marriages between tall women and tall soldiers to breed tall sons. Paradoxically the king never risked his 3200 Lange Kerls in battle and many soldiers were unfit for battle because of their acromegaly. In fact the Langen Kerls have become a perfect illustration that tallness isn’t necessarily a quality and costs a lot of money.