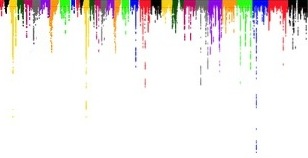 Since 2007 researchers of the Genetic Investigation of Anthropometric Traits (GIANT) consortium are quickly uncovering the polygenic traits that influence human height.  Recently they analysed data from the genomes of another 253,288 subjects and were able to identify 697 gene variants, the pieces of DNA that vary from person to person, in 424 gene regions as related to height. The variants were enriched for genes, pathways and tissue types known to be involved in growth and together implicated genes and pathways not highlighted in earlier efforts, such as signaling by fibroblast growth factors, WNT/β-catenin and chondroitin sulfate–related genes. They identified several genes and pathways not previously connected with human skeletal growth, including mTOR, OGN and binding of hyaluronan. The results indicate a genetic architecture for human height that is characterized by a very large but finite number (several thousands) of causal variants.  Soon we’ll have a map of all genes related to height, at which point it’s possible to learn how these genes express themselves under different circumstances.

If we know how we grow, we’ll know how to shrink.