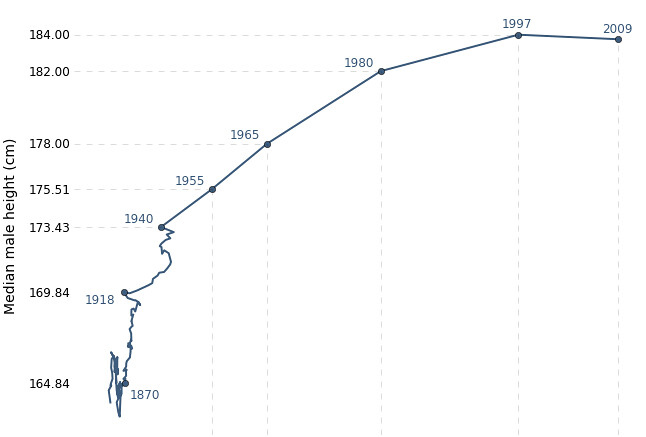 The Dutch are the tallest people in the world: its women stand almost 1.71 metres (5.6 feet) tall, and its men 1.84 metres. But how the Dutch became the world’s tallest people is still debated. Now a Dutch scientist, Gert Stulp, of the London School of Hygiene and Tropical Medicine, found that tall Dutch men have more children than average or shorter men.

Stulp searched the public record LifeLines for clues. It contains details about the lives and health of more than 94,500 people who lived in the Netherlands from 1935 to 1967. In this 30 year snapshot, the people who had the most children were tall men, and women of average height. The most fertile men were 7 centimetres above the average height. Statistically, they had 0.24 more children than the least fertile men, who were about 14 cm below the average height. Compared to counterparts in other countries where they often tended to have fewer children, taller women also reproduced more in the Netherlands. The study concludes that natural selection must have played a part: with time, more and more Dutch had ‘tall’ genes. “Height is very heritable – taller parents tend to have somewhat taller children than shorter parents,” Stulp said. “Because taller individuals would have more offspring in the next generation who would be taller, the average height in that generation would be a bit taller on average than the preceding generation, if all else is equal.” Stump observes that there seems to be a cultural preference as well: Dutch people love tallness even more than others. The tall are attracted to the tall. In contrast, in the United States it’s shorter than average women and men of average height that have the most reproductive success. If we learn how to reprogram the Dutch then perhaps we can reprogram the world.